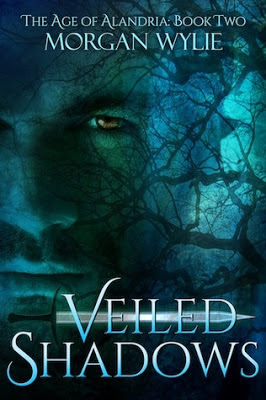 Shadows linger where light is obstructed, and truth is veiled.

Evil is an untreated disease in the once beautiful realm of Alandria.

Kaeleigh is faced with a reveleation that she must reconciles. She will decide is discoverint eht truth is worth the unknown consequences to both herself and her friends.

Daegan, the Ferrishyn warrior, is conflicted by more than his loyalties, and is confronted with emotions he doesn’t know how to deal with. A choice must be made. A choice…that may cost him more than he ever wanted to give.

The Droch-Shúil—enforcers and servants of the ancient darkness—continues to cast their shadow over Alandria seeking those who can be turned to their side.

The magic of The Orchids is growing, but not everyone will survive what is to come.

Veiled Shadows is the second installment in The Age of Alandria series:  The story of the Sol-lumieth’s quest for freedom of self and the power to battle the evil of the Droch-Shúil.

Morgan Wylie has been writing on and off throughout her growing up years, but started seriously working on her first novel in the Spring of 2009. Seven months pregnant with her fist child, she didn’t start off with a lot of focused writing time. But Morgan had an epiphany, if you will, and the story flashed before her so she began to write. And she’s still writing. Her debut Young Adult fantasy, SILENT ORCHIDS, will be out this summer.

Twitter/Blog/Website
Posted by Meredith at 1:00 AM