UNDER HIS SKIN by Stacey O'Neale Contest and Cover Reveal 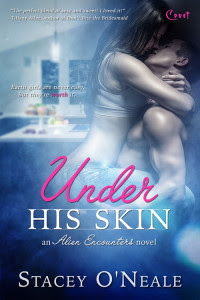 Earth girls are never easy. But they're worth it. Bakery owner Annabelle Sparks' business is booming ever since she won reality TV's Cupcake Wars. The one thing deflating her happy soufflé? The extremely sexy Kaden Chance only sees her as a best friend-and Annabelle wants so much more. After waiting a year for him recognize their chemistry, she's giving up and dating other people. What she doesn't know is Kaden's heart doesn't actually beat. He's not human. Heck, he's not even from Earth. To retain his intergalactic immunity, no one can ever know he is an extraterrestrial. But when Annabelle starts dating, something strange happens to Kaden's unmoved heart: it begins to beat. Now he faces an impossible choice-tell Annabelle the truth and be deported-or lose his last chance at love.

a Rafflecopter giveaway
Posted by Jennifer at 12:00 AM 5 comments:

I am so excited that SWEET TEMPTATION by Wendy Higgins releases today and that I get to share the news, along with an awesome giveaway!

If you haven’t yet heard about this wonderful series by Wendy Higgins, be sure to check out all the details below.

This blitz also includes a giveaway for a a paperback of the book with a signed bookplate and bookmarks! US only. So if you’d like a chance to win, enter in the Rafflecopter at the bottom of this post. 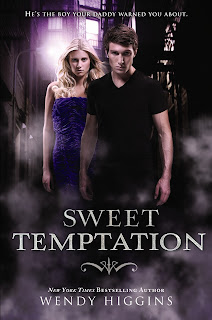 Bad boy Kaidan Rowe has never wanted for anything—money, popularity, musical talent…hot girls—but seducing them is part of his duty as a Nephilim, slave to the demon Dukes. As the son of the Duke of Lust, Kaidan has learned his father’s ways, becoming a master of passion, a manipulator of chemistry. Disobeying his father would mean certain death. Thankfully for Kaidan, he’s good at his job. And he enjoys it.

Until he meets Anna Whitt—sweet, smart, feisty, and inexplicably good—the one girl seemingly immune to his charms. The daughter of a guardian angel and a fallen one, she has a certain power over him, one that makes him wish for more than he could ever deserve.

Determined to save all the Neph from their dark lives as the influencers of sin, Anna joins forces with Kaidan to overcome the demons’ oppressive ways. In the light of her affections, Kaidan must undergo his toughest test of all, a battle of the heart.

Sensual and swoon worthy, this companion volume to the acclaimed Sweet Evil series from New York Times bestselling author Wendy Higgins, told from the perspective of the irresistibly sexy and mysterious Kaidan Rowe, gives readers revealing insights into his struggle, his intense connection to Anna, and most of all, the true emotions that drive him.

Author Note:
Sweet Temptation will encompass the entire trilogy in a condensed version, beginning with Kai's life before he met Anna, and taking readers through the epilogue of Sweet Reckoning. Sweet Temptation is a companion novel, not meant to be a stand alone story. It will definitely be a richer experience for those who have read the original trilogy. 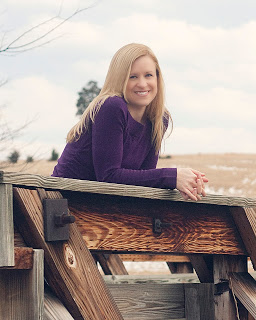 Wendy Higgins is the USA Today and NYT bestselling author of the Sweet Evil series from HarperTeen and her independently published Irish fantasy, See Me. She is a former high school English teacher who now writes full time, and lives on the Eastern Shore of Virginia with her veterinarian husband, daughter, son, and doggie Rue.
Wendy earned a bachelor's in Creative Writing from George Mason University and a master's in Curriculum and Instruction from Radford. Writing Young Adult (YA) stories gives her the opportunity to delve into the ambiguities of those pivotal, daunting, and exciting years before adulthood.

1 Paperback of SWEET TEMPTATION and a signed bookplate and bookmarks. US Only.


Ends on September 18th at Midnight EST!
a Rafflecopter giveaway
Posted by Jennifer at 12:00 AM No comments: