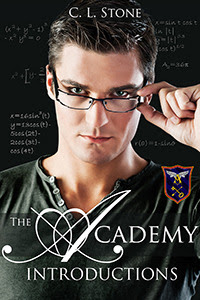 With an agoraphobic mother and a barely-there father, Sang abhors the isolation keeping her in the shadows. The only thing Sang craves is a fresh start and to be accepted as ordinary by her peers, because for her being different meant being cast out alone.
When her family moves to a new school district, Sang infiltrates a group of boys nearly perfect in every way. Grateful for an influence outside of her parents’ negativity, she quickly bonds with the boys, hoping to blend in and learn from them what it means to have a natural relationship with friends.
Only the boys have secrets of their own and they’ll do anything to keep her safe from the knowledge of the mysterious Academy that they've sworn allegiance to. Bit by bit, Sang discovers that her friends are far from the normalcy she expected. Will her loyalty change when she's forced to remain in the dark, or will she accept that she's traded one house of secrets for another?
Meet Kota, Victor, Silas, Nathan, Gabriel, Luke and North in a story about differences and loyalty, truth and mystery, friendships and heart-throbbing intimacy.
The Academy, ever vigilant.

MY REVIEW: Bizarre, but left me wanting more!

When I finished this book I had to stop and think for a minute. Technically, nothing really exciting happens. It’s called Introductions, and it’s just that. Each character in the series is introduced. There are eight main characters: Sang, , Nathan, Victor, Silas, Gabriel, Luke, and North. Each boy is introduced through their first meeting with Sang. We meet a few other minor characters including Sang’s deranged mother (think Mommy Dearest), her sister Marie, and two professors at the high school Mr. Blackbourne (bad cop) and Dr. Green (good cop).

Sang is extremely naïve, almost a bit overboard for me. But then again her mother is crazy and administers cruel forms of punishment on her daughters for simply talking to someone. So I guess her inexperience and social awkwardness are understandable. She is definitely a sheltered child because when she first meets she follows him back to his house (in her defense she was injured when ’s dog pounced on her). It’s late at night, a stranger offers to help clean up a few scratches for her (even though her own house is only feet away) and she even spends the night. Basically she does every thing a girl should NOT do when meeting a total stranger.

Of course is harmless and instantly needs to take care of the helpless Sang. He introduces her to his group of friends and they all immediately become protective of Sang. For her part she is just thrilled to have friends. It’s all a bit strange, which is really the entire tone of the book. Something is off or hidden from the reader and you just can’t put your finger on what it is. I know I’ve seen movies like this before. The ones where it ends and you’re left scratching your head trying to figure out what it was all about.

Sang shares several sweet moments with each of the boys making the friendships feel real. She takes an unexpected swim with Nathan after he shoves her in the pool, Silas worries about her and calls her house to make sure she's all right after a creepy run in at the mall (which leads to some crazy punishment from wacko-mom), Luke shares his dreams about opening a diner with her and there are more. Honestly the guys are too sweet, too caring, and overall just too perfect.

Other than a few run-ins with her mother and a sleezeball at the mall, not much else happens. So when I finished the book I was surprised I wanted more. I want to know what on earth the Academy is. I want to know more about the odd group of seven boys that seem too good to be true (every girl would love to be the lone female in the group). I want to know how Sang plays into everything. Why are the boys so concerned for Sang's safety at school? Who on earth are Dr. Green and Mr. Blackbourne? And what is up with Sang's deranged mother?

Overall I would place this book in the bizarre category. And I mean that in a good way. I can’t understand how a book that really isn’t about anything other than character introductions left me wanting more. So I’m off to get the second book in the series, First Days, and hope that some of my burning questions are answered.
Posted by Meredith at 3:14 PM