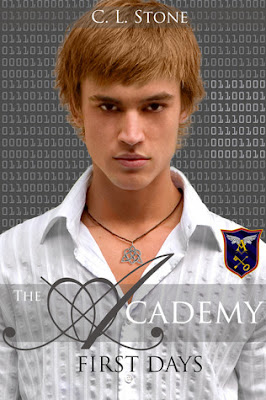 Sang Sorenson used to be the invisible girl in class. As a new student to Ashley Waters High School, Sang hopes that her new friends will be the change she’s been craving and will make fitting in a breeze.

But Academy students aren’t there to take it easy. The high school is overcrowded and rife with violence. When fights begin, Sang will uncover the true reason the boys traded in their private school life for a public one.

The principal and vice principal are hot to take Sang down, and her own mother is determined to entrap Sang forever in her belief that the safest place to be is in the shadows. Despite this, Nathan, Luke, , North, Silas, Victor, and Gabriel will discover Sang’s unyielding loyalty.

And they will sorely need it.

Juicier than the first and full of unexpected surprises.

Every once in a while you come across a random book: one that you’ve never heard of, one that wasn’t recommended, one that you just took a chance on. This is that book. Or rather, this is that series. I came across the initial book, The Academy Introductions and it sounded interesting. When I read it, it was nothing like what I expected. This wasn’t a bad thing, but it was definitely an odd read. Still, I needed more. So I read the second book, The Academy First Days. Guess what happened? It just got better.

This series is so addictive. I can't even explain why. There is so much mystery surrounding everything, and like the main character Sang, we are left with unanswered questions and theories. I don't know which character I love the most. Snag always surprises and the boys are all amazing in their own unique way. I can't pick a favorite.

The book reads somewhat like a contemporary YA. There are normal problems with high school: bullying, insecurities about fitting in, finding your place etc. But then there is the added mystery of the Academy hanging in the background. I am dying to know what in the world it is and its purpose. We get a lot more information in this book, but not everything. There is so much more to the Academy that I ever imagined. It’s almost like Pretty Little Liars, only instead of the mysterious A, there is the mysterious Academy. And unlike A, it isn’t out to destroy our beloved main characters.

More than just the Academy, I want to know the background of each boy and how they all got together as a group. Finding out why Kota took Sang under his wing made me love him so much more and it made his character all the more complex (in a good way). I know each one of the seven boys has a complicated and exciting history. I hope we get to know more. I even want to know more about Dr. Green and the always evolving Mr. Blackbourne. I especially hope to know more about my particular favorite guy!

There is a list of minor characters that spice up the story including the completely creepy "Mall" Greg, the goofy always-proposing Mike, the is-he-sincere Rocky, and the hopeful female-friend-for-Sang Karen. Ashley Waters High School is full of odd characters. We also get a little more of a glimpse into Sang's sister Marie, and a possible start to uncovering what's wrong with their mother.

At the very end is an added (an unexpected) mystery about Sang herself. I won't say what it is to avoid spoilers, but it's pretty darn juicy. There are so many twists and unexpected turns in this series. I can't wait for the next book as I imagine, just like the second book, it just keeps getting better.

a Rafflecopter giveaway
Posted by Meredith at 3:55 PM