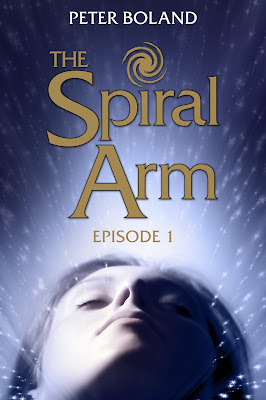 The Spiral Arm
Peter Boland
Release Date May 21, 2013
YA Dystopian

Wren Harper lives on an overcrowded Earth on the brink of apocalypse. There are just too many people. The answer lies 600 light-years away on Kepler; a planet more than double the size of Earth. For decades humans have been fighting another race for its control. Earth’s armies are depleted. So now 15-year-old cadets are sent to fight, trained along the way in vast combat ships. But why has Wren been chosen? She’s small and geeky and not a fighter. Will she survive Kepler? Or will the training kill her first. This is a debut novella-length episode in a series full of cliffhanger endings.

Q & A with Peter Boland:

Where did the idea for The Spiral Arm come from?
It started off as a TV script about seven teenagers floating across the universe in an escape pod, a kind of Big Brother in space. Getting TV made is notoriously difficult, so I tried adapting it into a book. It didn’t work. So I rewound the story. Where did this escape pod come from? Why were they all teenagers? The idea of a vast training ship full of teenagers popped into my head, a kind of Hogwarts in space. That’s when the Spiral Arm took shape.

Wren Harper is an intriguing character
Yes, she’s shy and a bit of a loner. She thinks she’s weak but there’s a thread of steel running through her. She’s a fish out of water, surrounded by elite super fit, aggressive teenagers who are all ultra-competitive. But Wren’s smart and uses her brain to get her out of some pretty nasty situations.

What made you decide to write in episodes?
It suits my writing style. I like the plot to move along quite quickly rather than stretching it out.

How many seasons of The Spiral Arm will there be?
Well, it takes four years for the training ship to get to its destination, the planet Kepler. The cadets will be trained along the way. When they finally get to Kepler, the cadets on board will be young adults and expected to fight, so there’ll be at least four seasons, maybe five.

When do you write?
Mostly in the evenings after work. I’m a writer for my day job as well, so sometimes I can spend up to 10 hours a day writing. Sadly only a small part of that is novel-writing.

You say your day job is writing.
Yes, I’m a copywriter by trade, which means I come up with ideas for ads and write the words for brochures and websites.

Does that help?
It’s the complete opposite of novel-writing. In a book you could spend ten pages describing a scene. Whereas, in advertising if you can’t say something in three or four words, no-one will read it.

Describe your writing process.
Initially I don’t write anything. I walk around with an idea in my head for weeks, mulling and chewing it over. I found this is the best way to slot everything into place. Then I jot ideas down in a notebook. When I’m happy I’ve got enough raw material, I write down key moments on post-it notes. I stick these to a wall and take a step back and rearrange them until the plot makes sense. Once I start writing properly I’ll still give myself enough room to modify things.

What advice would you give to first-time writers?
Get a good idea, one that can be summed up in a few words. Strong ideas are usually the shortest. Once you start writing don’t stop. Even if you don’t feel like writing. Your initial enthusiasm will wane after a week or two, that’s when you’ve got to get your head down and carry on.

What do you do when you’re not writing?
We live by the beach so I surf and mountain bike. I’m also a green tag in Taekwondo which is great for blowing off steam. In between I usually build outrageous things out of Lego with my two boys.

Author Bio:
After studying to be an architect, Pete realized he wasn’t very good at it. He liked designing buildings he just couldn’t make them stand up, which is a bit of a handicap in an industry that likes to keep things upright. So he switched to advertising, writing ads for everything from cruise lines to zombie video games. After meeting his wife Salini and having two boys, he was amazed when she sat and actually wrote a book. Then another and another. They were good too. Really good. So he thought, I’ll have a go at that. He soon realized there’s no magic formula. You just have to put one word in front of the other (and keep doing that for about a year). It also helps if you can resist the lure of surfing, Taekwondo, playing Lego with the boys and drinking beer in front of the TV.

Mr. Boland is giving away an ebook copy of Spiral Arm. To enter, just comment on this post. Leave your email address or Twitter handle so I can contact you. The lucky winner will be announced July 15!

So what's your favorite dystopian novel?